New publication in NAR is highlighted as a cover image!

G-quadruplex DNA structures have been shown to play important regulatory roles in gene expression in cells. The various topologies of G-quadruplexes can provide specific interaction with ligands and thus control gene expression. In international collaborative team headed by Professor Naoki Sugimoto, FIBER, Konan University, Japan, we developed a quantitative study of topology-dependent replication, which shows promise to facilitate the design of new drugs capable of controlling the topology-dependent regulation of gene expression. Aromatic ligands that bind to and stabilize G-quadruplexes to regulate DNA replication have therapeutic potential for cancer and neurodegenerative diseases. 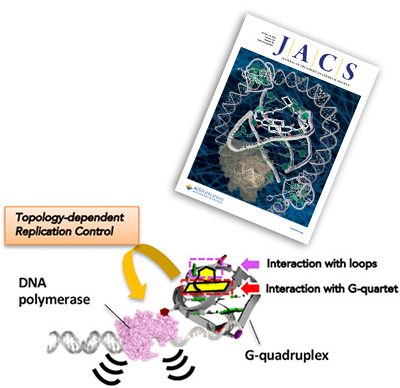 Link to cover: Journal of the American Chemical Society | Vol 143, No 40

Link to publication: Chemical Modulation of DNA Replication along G-Quadruplex Based on Topology-Dependent Ligand Binding

At a very honorable ceremony the president of Republic of Slovenia Borut Pahor presented a state honor of recognition for 50 years of Krka’s prizes and encouragement of scientific achievements, especially amongst younger population. As part of the festivity, Janez Plavec received from Jože Colarič, president of the board and director general Krka, an expression of gratitude for a long-standing mentoring work and all-round support for the Krka prizes.